Something In The Basement and Other Plays 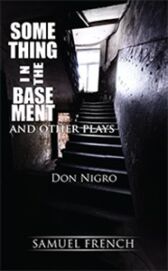 Something in the Basement - M1,F1

A lonely girl lives with her eccentric mother in an old farmhouse on the edge of a cornfield. She meets a strange man under a tree by the creek and is led into a web of lust and betrayal. Scarecrows are supposed to frighten crows, but the scarecrow in this cornfield is something more

A man catches a glimpse of a girl undressing in her bedroom window and becomes obsessed with her. He lurks in her bushes and spies on her as she sunbathes in her garden. One night he finds an unlocked window in her house. Unfolding simultaneously from the points of view of both characters, this tale of obsession and terror was produced in New York by Manhattan Class Company

An old woman is hired to sit with a peasant's dying mother, agreeing to take a lump sum and stay as long as the mother lives. Perversely, the mother refuses to die until the old woman, losing money by the minute, employs a strategy to ease her along to heaven. Suggested by Guy de Maupassant's dark and funny story, this parable about greed introduces the Devil in its own strange way

A park bench. In this Victorian primer gone berserk, Papa is a Christian censor. Mama has taken Annabel and Harry to the park to read them edifying passages from the Bible. The Old Testament story of lust, incest and murder she stumbles on is not what Mama had in mind, but it holds them all spellbound. This play will infuriate people like Papa, but its madness and witty irreverence reveals the unexpected beauty buried in a complex book that hypocrites who would control what we read are too blind to see