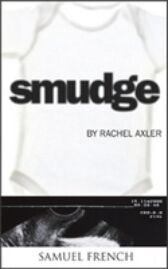 A hopeful young couple gives birth to a smudge

"For signs of intelligent life in the theatrical universe, I hereby refer you to Smudge, Rachel Axler's pitch-black comedy" ~ Marilyn Stasio, Variety "Creepy and funny. Precise and imaginative. Parenthood never looked weirder or more terrifying than it does in Smudge" ~ Rachel Saltz, The New York Times

"The mysterious newborn in Rachel Axler's smart, piquant Smudge is not lovable-looking ... In some sense, Axler's dark comedy is a horror story - a parent's nightmare rendered with sometimes lyrical surrealism ... A meditation on ambiguity and ambivalence, Smudge also illustrates ambition - a parent's thwarted, and a playwright's achieved" ~ Adam Feldman, Time Out New York

"An ambitious play, one that ponders such big questions as how to communicate and what it means to be alive. A play that sticks with you, both for its laughs and for its message" ~ Julia Furay, CurtainUp

"It's a testament to Rachel Axler's excellent writing and a marvellous cast that this dark sci-fi comedy actually works. In its weird way, the play gets to the heart of the matter: most of us, when we're young, look forward to happy, normal lives - 2.5 kids, a picket fence, all the flotsam and jetsam of the American dream - but end up with much more difficult realities" ~ The New Yorker