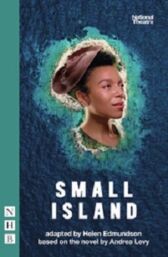 Hortense yearns for a new life away from rural Jamaica

Gilbert dreams of becoming a lawyer

Andrea Levy's epic novel, adapted for the stage by Helen Edmundson, journeys from Jamaica to Britain in 1948 - the year that HMT Empire Windrush docked at Tilbury

Small Island was first performed at the National Theatre, London, in 2019, in an acclaimed production directed by Rufus Norris

'Edmundson has a knack for skilfully distilling story... ferociously entertaining' ~ Time Out

'Inspiring adaptation... a gripping state-of-the-nation epic... the show acknowledges struggle and strife on all sides, flies the flag for compassion and achieves a hard-won (and still to be fought for) inclusivity' ~ Telegraph