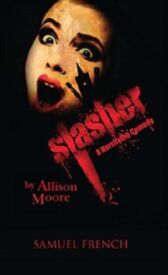 When she's cast as the "last girl" in a low-budget slasher flick, Sheena thinks it's the big break she's been waiting for

And Mom is prepared to do anything to stop filming

"Moore manages to bring a plethora of contemporary themes into the play, from feminism to militant pro-life groups to an insider's view of the horror-movie genre ... It's a job well done!" ~ San Francisco Examiner