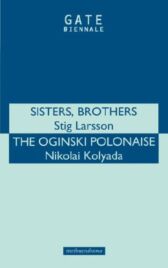 A great-value double-bill from Sweden and Russia by two internationally acclaimed writers ...

But the intervention of their respective boyfriends produces a night of increasing sexual tension, cruelty and, ultimately, revelation

Tanya returns to Russia after eight years in New York

And in flight from the KGB ...

Playing on A Streetcar Named Desire, Kolyada skilfully blends comedy and pathos to produce a bleak but human vision of post-perestroika Russia