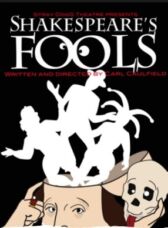 Richard Tarlton, Wil Kemp (who famously jigged all the way from London to Norwich circa 1600) and Robert Armin were the 16th century’s equivalent of our contemporary stand- up comics, as well as prima donnas with zany party pieces

They all played a role in the creating of the fools in Shakespeare’s plays, from Touchstone in As You Like It to feste in Twelfth Night and, most poignantly, the humanising “fool” of King Lear.

Caulfield brings these actors and their fools to life again, along with the Bard himself, in an exciting new work that combines wit, bawdy ballads, buffoonery, slapstick, wordplay and unashamed vulgarity with a serious look at the wisdom of Shakespeare’s fools

Oh, and quite a bit of jigging!