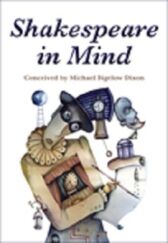 Motifs of fear and murder, love and death, dreams and destiny weave in and out of our modern minds that Shakespeare now inhabits

And just like Will's own plays, this dynamic production interweaves comedy, romance, song and tragedy as it presents contemporary characters interacting with Macbeth and Duncan, Juliet and Titus Andronicus, Othello and Desdemona, and 20 other classic characters

The production opens with Elizabeth Wong's Shakespeare's Brainscan, which uses the many murders in Titus Andronicus to demonstrate how our brains respond to fear and horror

And Jon Jory questions the cause of recent wars by riffing on Juliet's famous soliloquy,"What's in a name?"

Another woman can't escape the threats of her husband, who thinks he's Othello and she's Desdemona until she turns the tables by reimagining herself as Lady Macbeth!