Shakespeare in 100 Objects - Treasures from the Victoria and Albert Museum 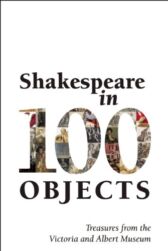 Within the collections of the Victoria and Albert Museum in London, there lies an extraordinary wealth of material relating to a single individual - William Shakespeare

This book presents a fascinating selection of one hundred objects often surprising, always delightful chosen by the museum's curators for the insight each affords into the world of Shakespeare and his plays

Drawn from across the V&A's rich and varied collections, there are paintings, sculptures, pieces of jewellery, engravings and figurines

There are posters and playbills, costume designs, photographs, illustrations and film stills

Amongst the more unexpected objects are a bed - the Great Bed of Ware, which Shakespeare mentions in Twelfth Night

A sword presented to Edmund Kean after his performance as Macbeth

And a real human skull - Yorick to Jonathan Pryce's Hamlet

Each object is illustrated in full colour and is accompanied by a compact essay on its history, its provenance, and what it has to tell us about Shakespeare and his plays, particularly in performance

The result is a book of rare quality that not only underlines Shakespeare's infinite variety, but also reveals his astonishing legacy in material things ... a substantial pageant that has not faded

"'Beautiful ... This book not only illuminates the reader's understanding of Shakespeare but highlights this extraordinary wealth of material in the [V&A's] collections. It's the sort of book you will come to again and again to dip into" ~ Drama Resource

"A glorious, serendipitous tour around Shakespeare's life, work and times" ~ The Stage

" ... a wonderful and fascinating collection of material ... The accompanying commentary is always very well informed. The book will appeal to anybody interested in Shakespeare in performance" ~ Mature Times