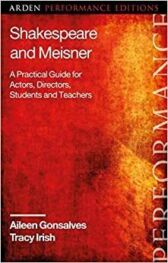 This practical handbook is invaluable for anyone performing, teaching, studying or simply wanting a new way to enjoy Shakespeare

It provides an outline of Meisner's work and legacy, a discussion of that legacy in the light of the enduring global popularity of Shakespeare, and a wealth of practical exercises drawn from Meisner's techniques

Shakespeare writes about the truth in human relationships and human hearts

They would seem a perfect match

Yet, following Meisner's note to his actors that 'text is your greatest enemy', Shakespeare and Meisner are often considered 'strange bedfellows'

Meisner's main rule is that 'you can't say ouch until you've been pinched' - in other words, an actor must genuinely feel something in order to react in a performance which is alive to the moment

“Beautifully written and highly accessible, this book contains a treasure trove of ideas. It brilliantly illustrates how the techniques developed by Meisner can bring Shakespeare's language vividly to life. It made me immediately want to try out the techniques and start to play” ~ Jacqui O'Hanlon, Director of Education, Royal Shakespeare Company