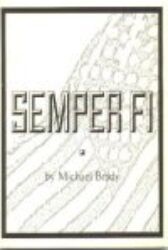 From the author of the popular and successful TO GILLIAN ON HER 37TH BIRTHDAY-- "...Michael Brady's fine new play SEMPER FI...a drama dealing with a Marine Lt. Colonel caught between a rock and a hard place--he was put in charge of the Marine unit in Beirut right before it was bombed by the terrorist truck in 1983. Ironically, he had pleaded for tighter security before this happened, but was refused. Now it appears he'll be the scapegoat. Brady creates characters you'll really care about...." Mary Ann Nichols, WCRB-FM

"...blind faith is the subject of Michael Brady's drama SEMPER FI, about the October 1983 bombing of the US Embassy in Beirut.... The play is the dramatic equivalent of the truck bomb that destroyed the embassy.... The drama explodes with the emotional intensity of the event that took more than 200 American lives...." Alicia MacArthur, The Salem Evening News