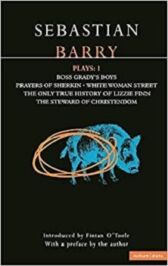 The five Plays in this Collection are ...

Mick and Josey are two old fellas employed on a hill-farm on the Cork-Kerry border, still dreaming of the Wild West and freedom

Set in the 1890s, it captures a moment of change at which ideology and doctrine are discarded for the sake of survival

About Irish emigration to the South of America

"Weaving together a Western ... and a very Irish drama of exile" ~ Independent

The Only True History of Lizzie Finn

Based on the life of the author's own grandmother ...

The Steward of Christendom

Thomas Dunne - an ex-chief superintendent of the Dublin Metropolitan police - looks back on his career built during the latter years of Queen Victoria's empire, from his home in Baltinglass

"Cerebral and lyrical, he is the new crown prince of Ireland's majestic theatrical tradition" ~ Newsweek

"Sebastian Barry's plays are about history, but not in any very obvious or familiar sense ... The history that informs these plays is a history of counter-currents, of lost strands, of untold stories. Against the simple narrative of Irish history as a long tale of colonisation and resistance, Barry releases more complex stories of people who are, in one way or another, a disgrace to that history ... In Sebastian Barry's luminous plays, grace and disgrace are not opposites but constant companions" ~ Fintan O'Toole