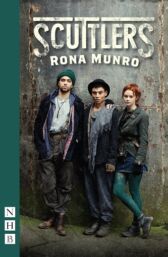 It's 1885 and the streets of Manchester are crackling with energy, youth and violence

As workers pour into Ancoats to power the Industrial Revolution, 50,000 people are crammed into one square mile

The air is thick with smoke

And life is lived largely on the street

Fighting over their territory with belts, fists and knives

Until now invisible in history, their lives, deaths, loves, lusts and defiant energy tell stories that repeat over the decades and finally reach us today

With nine leading roles and a large cast of mill workers and gang members, Scuttlers is well suited to performance by schools and youth groups, who will enjoy and appreciate its physical energy and dramatic storyline