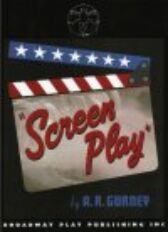 "The fundamental things may still apply, but they warp and change color as time goes by. In his gleefully partisan new play, the indefatigable A R Gurney takes on the movie that immortalized the song As Time Goes By, retooling Casablanca for the 21st century

So the title of his latest work is simply Screenplay, but were it actually to make it to movie theaters it would no doubt be called Buffalo

That's Buffalo, NY, which, in Mr Gurney's collegiate caper of a play, set in the year 2015, has become a way station for Americans in a blue state of mind who seek passage across the border into Canada. Rick's Cafe is now a bar named Nick's

And, as in the adored Warner Brothers' classic, it's the place where everybody goes - from Peter Lorre-like parasites who peddle illegal visas to handsome freedom fighters and their beautiful companions, as well as their sneering adversaries, who in this version are not Nazis but politicians of the Christian right

Screenplay is the third of Mr Gurney's works that deals directly with American politics, following the sincere ... Oh, Jerusalem and the disarming Mrs Farnsworth

True, the show often brings to mind a vintage Mad magazine movie spoof, with its contented goofiness and satiric swipes at big targets. And, of course, you wait to see how Mr Gurney roasts chestnuts like `Round up the usual suspects' and `Here's looking at you, kid.'

But the gimmick that is the basis of Screenplay has a built-in resonance that Mr. Gurney amplifies without, for the most part, screeching a sermon. There's a grin-making chutzpah in the very idea of relocating the moral crisis of Casablanca to American shores. For Mr Gurney sees the internal war between cynicism and idealism waged by Humphrey Bogart's hard-bitten romantic Rick as being especially pertinent to today's climate of political fatigue and passivity

For Mr Gurney, being frivolous has become a deadly national epidemic. Screenplay, it turns out, fights frivolity with frivolity" ~ Ben Brantley, The New York Times