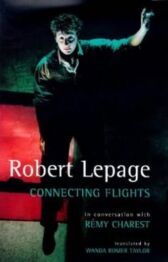 Audiences internationally have been thrilled and moved by such remarkable and personal works as Robert Lepage's The Dragon's Trilogy, Needles and Opium and The Seven Streams of the River Ota

And versions of world classics like Strindberg's A Dream Play and Shakespeare's The Tempest, Coriolanus, Macbeth and a solo Hamlet

And films including The Confessional and Polygraph, a version of his stage play

Now in these revealing interviews with Quebec journalist Rémy Charest, Lepage explores the sources of his creative inspiration and the compelling ideas that have animated his best known productions, revealing strong views on art, culture, place and politics