Rise Up! Broadway and American Society from Angels in America to Hamilton 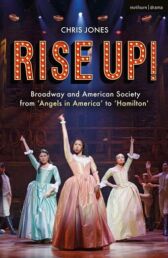 How did Broadway get from Angels in America to Hamilton?

The answer involves revolution on the most famous street in show-business, mirroring the colossal changes in American society as a whole

And in Rise Up! Broadway and American Society from Angels in America to Hamilton Chicago, Tribune theatre critic Chris Jones gives you a front-row-seat account and critical analysis of Broadway's renaissance

He chronologically unpacks Broadway's biggest shows within the context of the darkest days of the AIDS crisis, the emotional turmoil of the post-9/11 recovery, the artistic response to the global recession, the optimism felt by artists during the Obama administration, and the dramatic arrival of Donald J. Trump

In so doing, Chris Jones takes readers from the moment when Tony Kushner's angel crashed (quite literally) through the ceiling of prejudice and religious intolerance to the triumph of Hamilton, with the coda of the Broadway cast addressing a new Republican vice-president from the stage

Could make a great gift!

"It puts you into the room as it happened" ~ Cameron Mackintosh, theatrical producer

"A vivid compelling read that will form an important part of any Broadway-lover's bookshelf" ~ Matt Wolf, theatre critic

And Hamilton and Me - An Actor's Journey