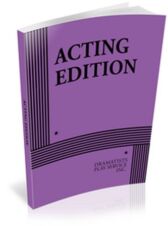 Joe and Craig sit on a bench in Central Park waiting for Mike to arrive for their Springtime Saturday ritual: enjoy the sun, drink the beer, watch the girls

But Mike is late and Joe is in an absurd frenzy over JulieAnne who has left him and broken his heart. Craig tries, in his own crude way, to comfort or at least distract Joe, and when Mike arrives - unnerved by New York's own special brand of brutal, lunatic karma when witnessing a traffic accident - Joe can't wait to start his story all over, much to Craig's chagrin

As Craig and Mike settle into their ritual, they try to help Joe through his anguish, and persuade him that JulieAnne was just one in a long line of women to be loved. Joe clings like an insane terrier to his belief in JulieAnne and in True Love

Craig and Mike's light-hearted consoling turns to razzing and then, in frustration, much darker, until, inadvertently, Craig lets slip that he knows where JulieAnne is

The afternoon takes a downwards spiral as secrets and resentments are uncovered, and in a violent conclusion, all three confront the memory of love, the pain of loss, and finally the bounds and betrayals of their friendship

"Adam Oliensis' Ring of Men, [is] a well-considered character study about three beer-swilling macho dudes whose long-time friendship is disrupted by an untimely revelation" ~ LA Times

"Ring of Men by Adam Oliensis is a park bench play that turns dark, and a good one. Violence erupts, friendship is betrayed, innocence is shattered it's another round in the battle of the sexes, and the evening's most substantive piece. Mamet-like, it hits its mark, disturbingly" ~ Drama-Logue