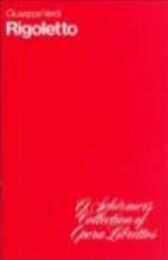 Le roi here is the Duke, a renowned womaniser, who seduces ladies as their husbands are taunted by his hunchback jester Rigoletto

An elderly nobleman, Monterone, curses them both for seducing his daughter and Ceprano, whose wife has been with the Duke, plots with the courtiers to punish him

Rigoletto is suspected of keeping a mistress, so while Rigoletto is out, the Duke slips into his house and finding Rigoletto's daughter Gilda, he proffers his love to her and she is smitten

After he leaves, the courtiers break in and carry off Gilda to the Duke's bedchamber. Soon Rigoletto enters and realises the mistake just in time as the dishevelled Gilda runs in

As Monterone is led to the dungeon, Rigoletto vows to avenge them both.

This is the Schirmer edition of the Libretto, in the original Italian with an English version by Ruth and Thomas Martin