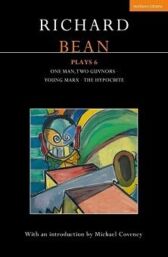 This sixth collection of plays from award-winning playwright Richard Bean, includes the world-conquering hit One Man, Two Guvnors, as well as Young Marx, his riotous take on Karl Marx's life in London, which launched London's new Bridge Theatre and The Hypocrite, a historical-farcical romp

Based on Carlo Goldoni's classic Italian comedy The Servant of Two Masters, sex, food and money are high on the agenda.

Creditors, spies, rival revolutionary factions and prospective seducers of his beautiful wife all circle like vultures. His writing blocked, his marriage dying, his friend Engels in despair at his wasted genius, his only hope is a job on the railway. But there's still no one in the capital who can show you a better night on the piss than Karl Heinrich Marx.

The Hypocrite
April 1642. Sir John Hotham, Governor of Hull, is charged by Parliament to secure the arsenal at Hull and deny entry to King Charles I. If only it were that simple. With a Royalist siege outside the city walls and the rebellion of the mob within, Civil War seems inevitable and losing his head more than probable.

“The Hypocrite serves as a scabrous, bawdy, witty, often flagrantly silly love-letter to Hull and its purported place in a crucial moment of national history... it hits the bull's-eye...Richard Bean returns to One Man, Two Guvnors form with a brilliantly entertaining new farce.” – Telegraph

“One Man, Two Guvnors - You would had to have had a humour by-pass not to enjoy it.” – Guardian