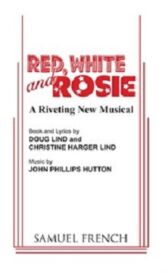 This "riveting" musical is about the forgotten soldiers of World War II - the women who worked in the factories, building the ships and planes so vital to the war effort

We see their initial naivete about working in a man's world, their growing sense of pride in what they are accomplishing and - eventually - their strength as they stand up for their rights

"As entertaining a new musical as any in town" ~ L.A. Reader

"Rosie the Riveter helped build planes in World War II. Now she has her own musical comedy. May it fly even longer than the planes did. Red, White and Rosie entertains without much strain, yet it also makes pointed comments about sexism, racism, militarism, even capitalism. You can enjoy it as a piece of nostalgia, but it has a lot more on its mind than most World War II musicals" ~ L.A. Times