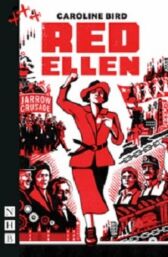 Forever on the right side of history, but on the wrong side of life, Labour MP Ellen Wilkinson is caught between revolutionary and parliamentary politics as she fights for a better world

Battling to save Jewish refugees in Nazi Germany

Leading two hundred workers in the Jarrow Crusade against unemployment and poverty ... she pursues each cause with a passionate, reckless conviction

And yet - despite a life spent running into the likes of Albert Einstein and Ernest Hemingway, serving in Churchill's cabinet, having affairs with communist spies and government ministers - she still finds herself, somehow, on the outside looking in

It was first produced by Northern Stage, Nottingham Playhouse and the Royal Lyceum Theatre Edinburgh in 2022