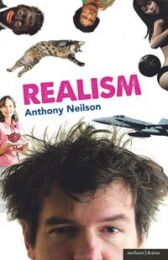 Realism is an exquisite, surreal trip inside the mind of one man

It was described by the Guardian as a 'bold and utterly distinctive all-singing, all-dancing show, like nothing else you'll ever see'

And by the Herald as 'an exquisite tragi-comedy for our times ... It should strike a chord with anyone who's ever struggled to make sense of the modern world and their place in it. An absolute joy from start to finish'

The play is published to coincide with its English premiere at the Soho Theatre, London in June 2011