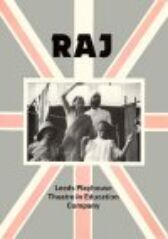 RAJ is set in India during British administration. It is a play about imperialism, about power and where it lies, about divided loyalties: loyalties born, nurtured and handed down over generations of British rule

The Indian characters are not victims. They are people who believed that the British represented 'fair play, tolerance, decency and equality'. Forced to face the realities of British rule in India, they struggle to make sense of their personal relationships with the British in the face of violence towards their own people.

RAJ was originally devised, researched and performed by the eight members of Leeds Playhouse Theatre in Education Company

"RAJ was a supremely accomplished piece of theatre, definite in its educational purpose, and skilful in realising complex issues through human experiences and concrete objects... The strength of RAJ was how it built a dynamic between private experiences of chauvinism or paternalism among the play's characters or audience and perception of public event or issue, be that in colonial India or contemporary Leeds. In this way it seemed to me the play challenged the audience's dominant view of history" ~ Martin Drury, Theatre Ireland

"One of the strengths of RAJ is its simple honesty. Tackling this kind of theme it would just be too easy to make the British the baddies and the Indians the goodies. This was undoubtedly a play about real people having to face up to real situations... informative, provocative and moving...The play thus had the quality to challenge us again and again...and capture young imaginations" ~ Robert Petty, teacher, NATO Drama Broadsheet