Put On A Happy Face - A Broadway Memoir 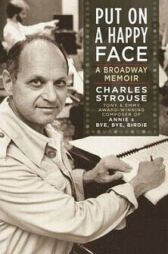 This fascinating and witty autobiography is packed with juicy, behind-the-curtain stories

Strouse is a musical-theatre legend who is as entertaining on the page as his work is on the stage!

Legendary Hollywood and Broadway composer, Charles Strouse, has composed some of the most successful shows in Broadway history including Annie and Bye Bye Birdie

He has been sampled by one of today's biggest rap stars - Jay-Z, in the Grammy-winning Hard Knock Life

Timed to coincide with public celebrations of Strouse's 80th birthday, this autobiography sparkles with wit and grants an insider's glimpse of Broadway, Hollywood and beyond