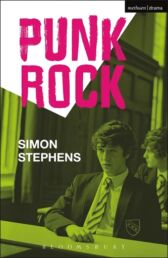 "Everything human beings do finishes up bad in the end. Everything good human beings ever make is built on something monstrous. Nothing lasts. We certainly won't ..."

Based on his experience as a teacher, Stephens describes his play as "The History Boys on crack"

It explores the underlying tensions and potential violence in a group of affluent, articulate seventeen year old students

Contemporary and unnerving, with elements of The Catcher in the Rye, Punk Rock follows the story of seven sixth-formers as they face up to the pressures of teenage life, while preparing for their mock A-level exams and trying to get into Oxbridge

They are a group of educated, intelligent and aspirational young people but step-by-step, the dislocation, disjunction and latent violence simmering under the surface of prosperity is revealed

"'Stephens's play ... confronts young people as they really are, and builds inexorably towards its tragic and violent climax'" ~ Michael Billington

The writer's perfectly calibrated setup leads audiences to some of the biggest, most complex questions of our times'" Karen Fricker, Variety

"'The piece is gripping, shocking and ferociously funny as anxieties jitter, hormones fizz and misery festers in the school library'" ~ Sam Marlowe, Time Out

"'A fierce and eventually shocking story that really taps into the anxieties of teenage youth'" ~ Mark Shenton, Sunday Express

"Teenage issues such as eating disorders and bullying are highlighted, but so deftly that there's no hint of a "yoof" play ... The dialogue zips along, and students love it" ~ Teaching Drama