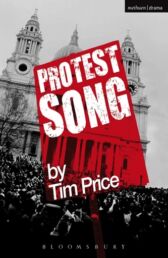 A dramatic monologue about the Occupy Movement and a remarkable political moment through the eyes of Danny, a homeless man, who is sleeping outside St Paul's Cathedral

It was too exciting. There was something amazing going on all the time. I learn an entirely different kind of London. All these buildings people walk past every day, and there's so much power in them, but no one knows. Tory Party HQ, City Hall, Egyptian Embassy, American Embassy, Foreign Office, but no one holds them to account. No one says, "You answer to us"

Danny sleeps rough on the steps of St Paul's Cathedral

Has done for years

And now Danny finds himself swept up in the last occupation of London ...

Inspired by a true story, this account of an unlikely hero allows us inside a remarkable political moment