Prick Up Your Ears - the Biography of Joe Orton 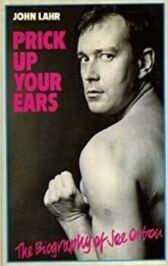 John Lahr, New Yorker critic, novelist, and biographer reconstructs both the life and death of Joe Orton, an extraordinary and anarchic playwright, whose plays scandalised and delighted the public, and whose indecisive loyalty to a friend caused his tragic and untimely death

'I have high hopes of dying in my prime,' Joe Orton confided to his diary in July, 1967

Less than one month later, Britain's most promising comic playwright was murdered by his lover in the London flat they had shared for fifteen years

In Prick Up Your Ears, originally chosen Book of the Year by Truman Capote and Nobel Prize-winning novelist Patrick White when it first appeared in 1978, Lahr chronicles Orton's working-class childhood and stage struck adolescence, the scandals and disasters of his early professional years, and the brief, glittering success of his blistering comedies, Entertaining Mr Sloane, Loot, and What the Butler Saw