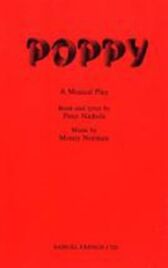 Poppy, a pantomime parody which explores British imperialism and the nineteenth-century opium wars, was first staged by the Royal Shakespeare Company in 1982

This version was performed at the Half Moon Theatre in 1988

Poppy is a celebration of Victorian values and exposes the hypocrisy, racism, drug dealing, money worship and sexual repression of the time through its favourite entertainment form

Dick Whittington, his man Jack, Sally the Principal Girl, the Dame, two pantomime horses, a flying ballet, a transformation scene and even the traditional song-sheet are all brought on to tell the serious and finally devastating story of the single most profitable crop of the British East India Company