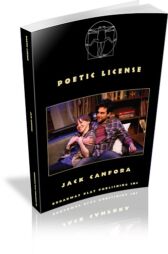 John Greer has a charmed life ...

He's a professor at a renowned university

And he's about to be named Poet Laureate

He owes much of his success to his wife, Diane, who aggressively shepherds his career

But when their daughter and her new boyfriend return home for the weekend, hidden secrets emerge that threaten to destroy the image he has cultivated in both his public and private lives

A biting drama set against the cutthroat "publish or perish" world of academia that explores how one person's past can shape his art, his family

And in this case his future

"Canfora's dialogue teases as it enthralls, slowly bringing us closer inside the minds of his characters" ~ TheaterMania.com

"It's hard to imagine that a crackling drama could revolve around a poet laureate's career. But Jack Canfora's Poetic License manages to render a tale of artistic ambition and hidden secrets with the breathlessness of a well-paced thriller" ~ New York Post