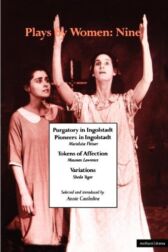 In addition to 'these fine new translations by Tinch Minter and Elisabeth Bond-Pable' (Observer) of Marieluise Fleisser's Purgatory in Ingolstadt and Pioneers in Ingolstadt (premiered at the Gate Theatre, London, March 1991), selected writings by Fleisser give a fascinating insight into her life and friendship with the young Bertolt Brecht in pre-Nazi Germany

The volume also contains Maureen Lawrence's Tokens of Affection, a powerful and unsettling play set in a centre for the containment of violent and maladjusted adolescent girls and Sheila Yeger's dream play, Variations, where Louise's research into nineteenth-century composer and pianist Clara Schumann is played against teh voices of other women, past and present, real and fantastical, counterpointing her search for her own identity

Each play has an afterword by its translator or author and the volume opens with an introduction by the editor, Annie Castledine

Tokens of Affection by Maureen Lawrence

Variations on a Theme & Clara Schumann by Sheila Yeg