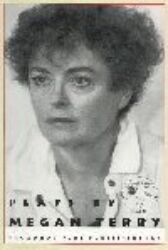 The work of no other contemporary American playwright can boast the extraordinary scope of that of Megan Terry. In the course of over thirty years her collected plays have become a virtual compendium of the styles of modern drama, ranging from collaborative ensemble work to performance art to naturalism.... Beginning with her earliest work, she has devised a politically and socially activist theater, using a diversity of nonrealistic forms to challenge a culture which has systematically disparaged nonlinear drama. Megan Terry remains a key figure in the development of the American alternative theater. David Savran, In Their Own Words: Contemporary American Playwrights

Terry's treatment of her story is masterly.... There is nothing unnecessary. It is as sparse, as vital and as undemonstrative as Simone's own life...a superb theatrical coup. Clive Barnes, New York Times

APPROACHING SIMONE is a chronicle--grave, didactic, warm, filled with an incandescent interest in its subject...a rare theatrical event for these hysterical and clownish times, a truly serious play, filled with the light, shadow and weight of human life, and the exultant agonies of the ceaseless attempt to create ones humanity. Megan Terry's play, may very well stimulate renewed interest in one of the most powerful minds and tormented spirits our age has produced. Jack Kroll, Newsweek

...a purity of intent that is startling. Before I write another line let me say that Ms Terry's script...is absolutely magnificent, the most impressive new play in a very long while. Kevin Kelly, The Boston Globe

...Simone Weil is radically different from the sort of woman we usually find represented in the theatre...she is an adult female being. Her battles are not sexually determined. She is a throwback to the Greeks. By exhibiting physical, intellectual, and spiritual courage, she deals with both internal conflicts and political struggles. Harriet Kriegel, Women In Drama

BABES IN THE BIG HOUSE:

BABES IN THE BIGHOUSE is a wildly varying production, with situations so funny they're sad, so tragic they're hilarious. The characters are acid-strong. Steve Jordan, Omaha World-Herald

Megan Terry, like Kafka did in "The Trial," uses razor-honed, sardonic gallows humor to coax empathy and understanding--so her theme-- the dehumanization of incarcerated people aided and abetted by sexist stereotyping and sadism--comes across with even greater power and urgency. Victor Livingston, Philadelphia Evening Bulletin

With BABES IN THE BIGHOUSE, Terry's development achieves a new precise fluid force and cohesion. In a gesture similar to one Caryl Churchill would make in Britain a few years later, Terry and Schmidman cast men as well as women in the roles of the female prisoners and matrons....(thus) we quickly accept that our perceptions of gender are based on social roles, gestures and styles. Helene Keyssar, Feminist Theater

...the best new play since THE BRIG and THE CONNECTION...the theme and scope the variety and density of VIET ROCK would have excited Brecht. Richard Schechner, T D R

VIET ROCK vividly expressed is a breakthrough...extraordinary on at least two counts. It is the first realized theatrical statement about the Vietnam war...and a rare instance of theater confronting issues broader than individual psychology... I would like to assert my admiration. Michael Smith, Village Voice

Wild...an acid indictment...ensemble acting effects that have to be seen to be believed...VIET ROCK has been brilliantly staged, these Open Theater types are contributing something new to the concept and technique of stagecraft - Variety

VIET ROCK is more important than what it means...it is an original and gutsy bit of theatre. It is a theatrical demonstration that...ambushes an audience with an extraordinary evening of theater and...it wins as an emotional gut shot at the tragedy of the times. Al McConagha, Minneapolis Tribune