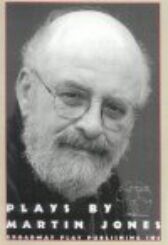 "West Memphis Mojo is set in a barbershop in West Memphis, Arkansas, in November, 1955, when rock and roll was starting to take off - when, that is, white record companies and other entrepreneurs were making forays into rhythm and blues....

The story is a simple one, though none the less powerful for that ... What matters most of all, of course, is the absolute authenticity of character and emotion. Mr Jones is a very good writer..."

"... Squats portrays what it is to be young and human in a world defined by poverty, homelessness, mental illness, prostitution, domestic abuse, arson, alcoholism, suicide, teen-age pregnancy and AIDS

But Squata is neither preachy nor overdone. It doesn't take on a shopping list of societal ills. Rather, they are the landscape for the characters. Problems intertwine and contribute to each other. Though this landscape is bleak, the plot and the quirky characters are not ... it is written with insight and compassion"

"... Dark River concerns a failing family business that has inadvertently poisoned the waters ... transcends mere allegory. Jones uses pollution as a metaphor for the sins of the fathers ..."