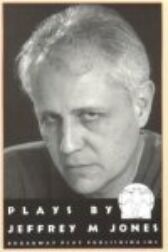 The Death And Life Of Language: Three New American Voices

"Jeffrey M Jones is an artist who shares the conviction that American theatre must be as complex, contradictory, and strange as contemporary life itself. To this heresy they add the notion that language heard onstage must be imaginatively and energetically bent, folded and mutilated as the language one hears on the street, on the news, and spewing from the mouths of our "leaders"

The plays of Jones are dense, wordy, beautiful monstrosities, affronts to every rule of "good" playmaking. They take their title seriously, they PLAY with words, with dramatic structure, with meaning, mocking the idea that a word or a sentence can reliably said to mean anything in so heterogeneous, decentered a world as ours

As in America today, where the gap between word and meaning grows surreally wider every day, nothing is in more desperate need of critical reexamination than the deeply troubled relationship between language and meaning

This weird, fecund impotence of language in late Capitalist America is the favored subject of Jeffrey M Jones, a poet and playwright who has been writing and directing in New York for fifteen years

Jones describes his most recent work as collage: random collections of the shards and fragments of everyday speech, of advertising, church and state, which are then reassembled into a series of "scenes"

The results of this process are so disorienting, disquieting, and resistant that audiences, like the one privileged to see his latest piece CRAZY PLAYS at a festival of experimental work (organized by an uncharacteristically adventuresome Manhattan Theater Club) often get very angry

I'm not sure but that this is precisely the reaction Jones is seeking, not because he prefers, like some overgrown enfant terrible, to see people stream out of his performances, but because his work is about rage, impotent rage, as the driving force (to insist on the paradox) in America today

CRAZY PLAYS is, as of this writing, a collection of six plays, totalling 71 pages, through which characters pass, appearing and disappearing randomly, and resurfacing in a variety of guises

I qualify this description because as many as 45 CRAZY PLAYS may exist, to be shuffled in and out of production as Jones (or chance) dictates. In Jones' world, there is no true communion, no recognition

Some characters are dimly aware that something is profoundly wrong, but they appear to have no idea how to seek or give comfort

... a portrait of a bankrupt patriarchy in its death throes?

An extended riff on the degradation of all forms of social intercourse in the West?

A satire on the Great American Family Drama? A comedy of bad manners? A celebration of cheesy language?

Imposing one's own readings on Jones' highly elliptical, allusive and elusive works is one of their principal pleasures, and an indulgence he generously sanctions

But Jones is perhaps too coy in suggesting that one reading is quite as good as another. For Jones' critique of contemporary American culture is too acute (and clearly, too upsetting for many of his spectators) to miss

And since his critique is embedded in his chosen form-most Americans just do not want to see their society as being so utterly de-centered, disorderly and damned complicated as Jones' collage plays insist it is-his political project succeeds in ways that more traditional forms of narrative do not. He de-centers us; he yanks us out of out theatre seats and sets us down in the middle of the mess we've made" ~ Liz Diamond, Cahiers du Théâtre Jeu, #58

"Jeffrey Jones' plays seem to take place under a strobe light: brilliant flashes of deflated pop culture icons that slowly accumulate into a bitter satire of the emptiness and loneliness of our culture

They are also usually sharply paces and sleekly designed. Yet despite these virtues, they are often cold. Every fragment of an emotion is immediately undercut, and when the smoke clears, the dominant impression is of a brilliant but ultimately self-involved vision, the work of a clever but naughty adolescent

The good qualities of Jones' work are amply displayed in his latest post-modern vaudeville, THE ENDLESS ADVENTURES OF M C KAT, OR HOW THEY GOT FROM A TO B. It's a lively concoction made all the more vibrant by the elastic and salty actors of the Cucaracha Theatre-a striking improvement over the starchy performances common in Jones' usual company, Creation Productions, proving you can be avant-garde without taking yourself too seriously. The kaleidoscopic plot interlaces several strands

The title character is a naughty little mongoose-like character with a squeaky voice portrayed by a stuffed animal-one of the many anti-illusionist jokes is that he hates being called a stuffed animal. The framing plot involves a playwright (all-too-self-consciously named Big Dick) wandering a small town in search of M C All sorts of commentary about the longing for artistic, religious and other types of transcendence is thrashed about. About the way we encounter a myriad of redneck types, from a lost sportscaster to a fat fundamentalist to a manic doctor who screams lectures at us about the value of stress reduction. As usual in Jones' work, moment-to-moment the humor is bristling and the pacing is deft

But the set is imaginative-a backdrop of a baseball field and a perversely angled pink-and-lime-green sportscaster's booth that doubles as a puppet stage. And the cast sparkles. I particularly enjoyed Al Cima in a variety of finely distinguished small roles. M C Kat does indeed run the full gamut from A to B, taking a delightfully circuitous route. I just wish Jones had tried to reach C" ~ Robert Massa, The Village Voice

"Cucaracha Theatre's latest is the saga of M C Kat, meerkat extraordinaire, and his reluctant, sinus-afflicted friend, Dick Sorehead, as they traipse a Pop Americana landscape of quick draw cowboys, inbred towns, self-help T V, and "high-concept" Mets games: "Let's become one with the baseball inside us." Jeffrey Jones' wonderful waddle through the vernacular imagination plays through April 27, at the Broome Street Theatre." Brian Parks, The Village Voice

Even paranoids have enemies, goes the old joke; Jeffrey M Jones' TOMORROWLAND is a ninety-minute incarnation of that line. The second of his projected trilogy, "A History of Western Philosophy," this piece is a logical sequel to Jones' first installment, DER INKA VON PERU, which romped through colonial history and western literature, juxtaposing a Harlequin romance with a William Prescott adventure tale on a peephole stage: a blank wall with a hole in it revealed an upstage wall with a smaller hole

TOMORROWLAND tightens the focus implied by that telescoping set, concentrating on postwar America in a suburban living room with an upstage window. Beyond it stretches the Moon's surface, full of promise, and the earth rises in the distance. Like DER INKA, TOMORROWLAND is a verbal collage; its dialogue, says a program note, "was constructed from source material all dating from the year 1950"

Three interweaving plots - a western in which Jimmy Ringo hunts down an outlaw, a sci-fi thriller about extra-terrestrials spying on earth, and a family sitcom - depict the exuberant optimism of the American Dream at the advent of frozen orange juice, television and suburbs

Guided by Television Star Shannon Malleson, we visit the Wilfred family in their Delray Beach, Florida, home, where Jason complains from his easy chair about his country's wimpy defense. Carol makes Wednesday her casserole day and imagines creatures in her backyard, and their daughter, Divina, asks her dad about the Cold War and has a study date with Selden, the high school football star

The characters' fears edge seamlessly into paranoia as the family scenes dissolve into the western in which Jason plays the gunman, Selden the outlaw, Carol and Divina their devoted girls

Shannon and her co-narrator, a health department doctor, provide an ironic point of view that deepens the play's obvious connections between red scares and cowboy heroics

Doubling as the aliens who inspect Earth after its (presumably nuclear) destruction, Shannon and Dr Sinclair, always cheery, offer hysterical warnings of modern horrors: communism, polio, madness, radiation, and body odor. Daniel Moses Schreier's relentless soundtrack underscores the intersecting genres with electronic music, homey Muzak, and cowboy arpeggios, all maintaining the same even rhythm. Jones has paced TOMORROWLAND, unlike the frenzied DER INKA, with uninterrupted smoothness, creating some lulls, but he gets textured performances from Barbara Somerville as Divina, Karla Barker as Shannon, and especially, as Jason, Zach Grenier, whose repellent charisma makes him the quintessential actor for Jones' sleazy heroes. Near the play's end, crazy Carol confesses her role in a spy scheme, describing her experience as "controlled schizophrenia," which could describe equally well Jones' diagnosis of the U.S. and his multi-focus dramatic form

If at times Jones' ideas about theater and history rise to the surface of this play more than they issue out of its action, that's a welcome improvement over similar experiments (even DER INKA, to some extent) whose complex issues are peripheral to their cleverness. Jones' vision, alas, is as intelligent as it is bleak" ~ Alisa Solomon, The Village Voice

"The essence of Jeffrey M Jones' TOMORROWLAND, his second "historical-quotation" play to be produced by Brass Tacks Theater, is collision ... Cultural memory collides with present realities. Genres collide so hard they take on each other's characteristics

The American dream crashes into the manipulative impulses and paranoias behind it. Conventional images careen into walls of tension, anxiety and neurosis. What seems to be real keeps banging into what actually might be real. It's not pretty. It is very funny and unusually stimulating

TOMORROWLAND has been created totally out of found texts quoted from movies, pulp fiction, T V sitcoms and game shows, advertisements, political transcripts and journalism, all turned out in 1950, the salad days of the post-War period and the peak of American feel-good optimism. The stories are intercut and juxtaposed, each commenting on and influencing the way we see the others. They ultimately become so thoroughly mixed that they meld together becoming a fascinating, interwoven collage that shows American culture in ways we've seldom viewed it. There's clearly a lot of play in this play, but Jones takes it far beyond the parlor game of spin the radio dial

His intertwining narratives are intelligent and insightful without losing the ironic wit and sense of play at the theatrical heart of the work ... Jones' work deals insightfully with the way language is misappropriated and used to create illusions... Jones has created an interesting arena for contemplating the often illusory ways we perceive our world." Mike Steele, Minneapolis Star & Tribune

"Moibius strips in which formal experiment twisted into and became satire ..." ~ Alisa Solomon