Pigspurt or Six Pigs From Happiness 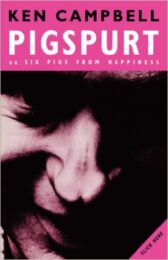 "The only time I feel like dusting down the term 'genius', in the pure sense of an influential demonic character, is when I'm confronted by a great Ken Campbell show" ~ Michael Coveney, The Observer

"Campbell is conducting us on a guided tour of the wilder shores of his own imagination. The stories pour out of him ... Things become curiouser and curiouser as Campbell explains his theory of enantiodromia and relates the terrible adventures of his other self, Pigspurt, adventures too dangerous and depraved to be described in a family newspaper. Suffice it to say that this nasal infestation indulges in "carnal nosilage" and "cunnisneezus"... Campbell is an inspired original who reaches the parts other entertainers haven't even heard of" ~ Charles Spencer, Daily Telegraph

"Demonstrates Ken Campbell's talent for capturing a comic moment and blowing it up into a great balloon of idiotic fantasy" ~ Jane Ellison, Evening Standard