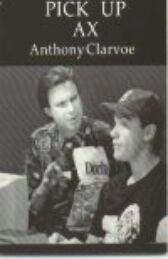 Clarvoe's very hip script centers on the fortunes of two bright young men, Keith Rienzi and Brian Weiss, who have bootstrapped themselves from a free-wheeling, penny-ante operation into a multi-million dollar computer software corporation through Keith's inventive brilliance and Brian's business instincts. But at 27, Keith is losing some of his whiz-kid brain, Brian's financial pipeline is drying up, and their supplier is refusing to deliver vital microchips to them. Just when these two aging wunderkind are facing disaster, in walks...Mick Palomar, a slick operator armed with an MBA and a flair for old-fashioned extortion...." Richard Christiansen, Chicago Tribune

"PICK UP AX is a fast, funny, entertaining play about a fascinating subject: the growing pains of the personal computer industry.... PICK UP AX is likely to be an audience-pleaser because of the sheer exuberance and wit of the script...." Brin., Variety