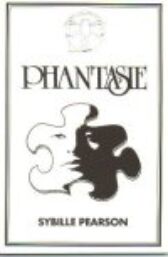 "PHANTASIE, by Sybille Pearson, is about something -- something that, even if it does not affect you directly, you can care about....

PHANTASIE (which is German for `daydream,' and complexly relevant here) works as much in stage images as in words, and always exhibits a fresh turn of mind.... ...a play that is intelligent, sometimes moving, and always imaginative. ...a generally thoughtful and compelling evening." John Simon, New York

"An adoptee searches for her natural mother in Sybille Pearson's PHANTASIE, but that search is less for a new parent than it is for clues to the character's buried self. Without knowledge of the circumstances of her birth or of her parentage, the woman has had to fantasize possibilities. In her imaginative musings, she is everything from the child of a mother who was raped to the unacknowledged daughter of a Rothschild. ...this perceptive new play...is inward and elliptical, at times enigmatic. The central character's quest will continue long after the play has ended. There are no sudden emotional outbursts or last-minute revelations. The drama remains interior...that intensifies the interest. ...touching...truthfulness within a natural reserve...quietly affecting...[an] Intimate journey of discovery." Mel Gussow, The New York Times

Originally produced in New York by the Vineyard Theater