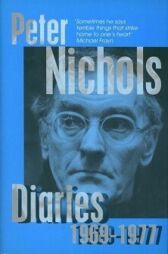 The playwright Peter Nichols was a compulsive diarist all his life

He wrote for himself alone, responding to an urge to record the daily doings, private and professional, of his family, his fellows - and himself

The resulting diaries are candid, insightful, and often as shockingly funny as his plays

This selection, republished to mark the playwright's 90th birthday, covers the extraordinarily fruitful period between his first real hit, A Day in the Death of Joe Egg, to the stirrings of his masterpiece, Passion Play

As the seventies dawn, Peter Nichols is watching Joe Egg being filmed - and hating it

His next play, The National Health, is doing good box office for Olivier's National Theatre - but Olivier is hating it

And then there are three small children (and a fourth in long-term hospital) to cope with, an extended family and the renovation of a tumbledown barn in rural France

What emerges is one of the most revealing and hilarious accounts of a writer's life, and how – whatever success comes along – everyday life will keep getting in the way

As Nichols attempts to negotiate the world he has found himself in – a world populated by the likes of Albert Finney, Kenneth Tynan, Stephen Sondheim, Michael Frayn and John Osborne – he finds that he is never free from having to entertain his in-laws or cope with children vomiting in the back seat

Nichols' Diaries are a brilliantly funny, acerbic study of theatrical life, a warts-and-all portrait of parenthood, and a fascinating companion to that remarkable decade, the Seventies