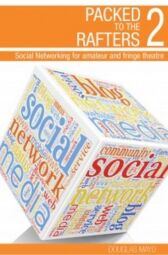 Want to know how social networking can sell theatre tickets?

Many groups will answer "Yes", but most have yet to grasp the huge potential these sites offer or how to use them effectively

Following the enormous success of Packed To The Rafters, Douglas Mayo has set out to simplify and explain how social networking can benefit amateur and fringe theatre groups

Just as email did in the late-90s, social networking offers you a chance to connect to countless new patrons

If you know how it works

He guides you through the social networking maze and covers everything you need to know, including ...

- how to set up accounts with the major social networking sites

- the principals of social networking

- top tips for getting your message out there

FOR THE ORIGINAL
Packed to the Rafters, click here