Over Under and Around - Essays on Performance and Culture 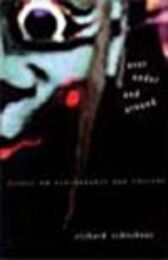 The essays collected in this book represent Schechner's lifetime in performance studies. Political theatre, the avant garde, the secular and sacred rituals of performance, the nature of belief and its suspensions in theatre, aesthetics, performance theory, and performance studies have been his recurring subjects even as his knowledge has changed and deepened from seeing performances of all kinds, all over the world

So he is in a position to compare the incomparable-Yaqui and Ramlila, dixi and namahage-in a manner that furthers the study of ritual and indicates the ways performance is similarly and differently imbricated in different communities.

Schechner has also learned that the avant garde is more than a historical occurrence localized in, or originating in, a single culture. Schechner asserts that we can also understand the avant garde as a particular kind of articulation of the traditional and the oral

The range and depth of Schechner's scholarly endeavour informed by his artistic practice has led him to think about the deep structure of performance and theorize its construction across cultures. This confluence of practice and scholarship, where each realm wholly informs the other, is second only to Schechner's far ranging contact with diverse types of performance in generating his exceptional thinking on the meaning and importance of performance as the paradigm for the twentieth and twenty-first centuries

RICHARD SCHECHNER is a theatre director, author and teacher. He founded The Performance Group and East Coast Artists. He has directed plays, conducted performance workshops and lectured in Asia, the Americas, Australia and Europe. His books include Performance Studies-An Introduction, Performance Theory, and Between Theatre and Anthropology. He is University Professor and Professor of Performance Studies at the Tisch School of the Arts, New York University