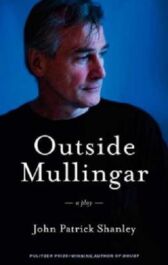 A compassionate and delightful romantic comedy from the Pulitzer Prize, Tony and Oscar-winning author of Doubt ...

Outside Mullingar is about the romance of Anthony and Rosemary, neighbors in rural Ireland, who are nearing their middle years

When Anthony's father threatens to disinherit his son, Rosemary steps into the middle of a land feud and family eccentricities beyond what one might imagine

On the brink of romantic catastrophe, this one-of-a-kind Irish heroine fights against time and mortality in hopes of securing her dream of love

It is by turns poetic, uplifting, and dark

" ... a charmer of a play ... In Shanley's first work set in Ireland, he lovingly tends the roots and tills the soil of his ancestry, spinning a tale suffused with melancholy humor and a deep yearning for heart, home, land, faith and a sense of belonging ... Shanley has a poet's ear for the lyrical music and twinkly humor of their dialogue" ~ Hollywood Reporter

"Shanley's best play since "Doubt," and like that hit from a decade ago, it's lean, dialectical and packed with wise saws and aphoristic gems" ~ Time Out, New York

"In the work of John Patrick Shanley, the truth is as charming as it is painful, reality as touched with magic as it is factual, and existence as absolute as it is illusory" ~ BOMB magazine