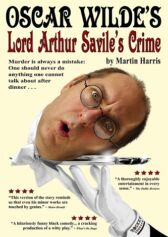 "Murder is always a mistake ... one should never do anything one cannot talk about after dinner"

Lord Arthur takes his marriage vows very seriously, but when he has his fortune told just weeks before the wedding, his destiny simply cannot be ignored and he has to fulfil his duty

Join Lord Arthur and his trusty valet, Middlewick, in a wicked black comedy that positively fizzes with fun

The play is to be performed by two male actors

Runs about 90 minutes, but it is also possible to do a shortened version of about an hour