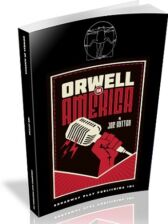 "Brilliant Orwell's discomfort, loneliness, humor and passion are all developed before us in language that is very much the author's. It is lively as well as precise" ~ Susan Hall, Berkshire Fine Arts

"The premise of a young person accompanying an author of great esteem on a heart-of-America book tour recalls the recent David Foster Wallace movie The End of the Tour, and there is indeed something action-oriented about this production, which skips energetically among hotels and cities and speaking arenas. 'Time and place are dealt with rather cinematically,' Sutton said of the play, in an interview Take the trip with him" ~ The Village Voice

"Mr Sutton has obviously researched Orwell and his times and has skillfully woven all of the pertinent facts into his well-crafted dialogue ... [a] very enjoyable biographical fantasia" ~ TheaterScene.net