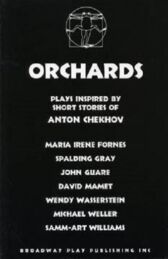 "Take seven contemporary American playwrights with highly distinctive voices and wildly differing approaches to the theater. Ask each to adapt one of Anton Chekhov's short stories, which range in mood from the melancholic to the satiric -- and back again...the results are incomparably delicious...when ORCHARDS is good -- which is most of the time -- it is very, very good, indeed ..." ~ Hedy Weiss, Chicago Sun-Times

"The notion of asking seven contemporary playwrights to produce variations on themes by Anton Chekhov seems at first like asking for combination-platter theater....All of the playwrights use Chekhov short stories for a springboard -- but some have jumped so far into the deep end that it would be more accurate to say that they maybe looked at his picture while they were writing.... Whether you pick from Column A or Column B, ORCHARDS offers a superior menu" ~ Megan Rosenfeld, The Washington Post

THE MAN IN A CASE by Wendy Wasserstein, one man, one woman

THE TALKING DOG by John Guare (from "A Joke"), two men, two women

RIVKALA'S RING by Spalding Gray (from "The Witch"), one man