One Thousand and One Nights 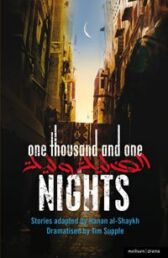 Large Mixed Cast
Adaptation for adults of the world's great folk story-cycles adapted for the stage by leading theatre maker Tim Supple, from the stories written by the seminal Lebanese novelist Hanan al-Shaykh

This unique edition will unlock the ancient tales for a new generation of readers and performers ...

Written by Arabic writers from tales gathered in India, Persia and across the great Arab Empire, the One Thousand and One Nights are the never-ending stories told by Shahrazad night after night, under sentence of death, to the king Shahrayar who has vowed to marry a virgin every night and kill her in the morning

Shahrazad prolongs her life by keeping the King engrossed in a web of stories that never ends a fascinating kaleidoscope of life, love and destiny