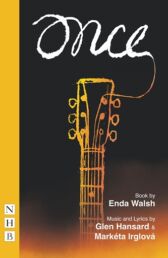 Winner of 8 Tony Awards out of a possible 11, Once is a stage adaptation of the 2006 award-winning film of the same name

The stage musical retains many of the songs written by Glen Hansard and Markéta Irglová, including the Academy Award-winning Falling Slowly

It tells the charming tale of a romance between an Irish street musician and a young Czech immigrant, drawn together by their shared love of music

Over the course of one fateful week, an unexpected friendship and collaboration quickly evolves into a powerful but complicated love story

A hit musical Off-Broadway, Once premiered on Broadway in Spring, 2012 to rave reviews ...

"A jewel box of a musical - small, delicate, brimming with emotion and charm" ~ Vogue

"It may sound like heresy to fans of the 2006 film, but this bewitching stage adaptation arguably improves on the movie, expanding its emotional breadth and elevating it stylistically while remaining true to the original's raw fragility" ~ Hollywood Reporter