On the Verge or The Geography of Yearning 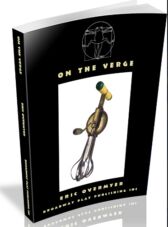 This extraordinary comedy is among the most imaginative works of modern drama ...

In 1888, three American lady adventurers take it upon themselves to discover the mystery of things and discover the future

Armed with umbrellas, a picnic and pith helmets, they set out to explore Terra Incognito and eagerly embrace new cultures and distant civilisations

Caught in a time-warp, they then find themselves in Eisenhower's 1950s America where they sample rock 'n' roll

The trio finally split when two decide to remain in 1955

And Fanny falls in love with a cocktail bar owner!

And so it's left to Mary to continue the journey of exploration ...

"In Eric Overmyer's chimerical comedy, three Victorian lady explorers set out on an adventure that takes them to darkest Africa, highest Himalaya and Terra Incognita ... Blending Tom Stoppard's limber linguistics with the historic overview of a Thornton Wilder, Mr Overmyer takes his audience on a mirthful safari ... spinning into time travel. The three 'sister sojourners' thwack their machetes through the wilderness while telling tales of past jaunts among the natives. As intrepid trekkers, they put the lie to any charge that they are representatives of a weaker sex. Mr Overmyer has written a play that is joyfully feminist" ~ Mel Gussow, The New York Times