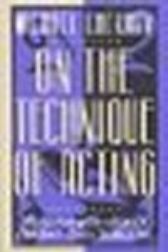 In the four decades since its first publication, Michael Chekhov's To the Actor has become a standard text for students of the theater. But To the Actor is a shortened, heavily modified version of the great director/actor/teacher's original manuscript, and On the Technique of Acting is the first and only book ever to incorporate the complete text of that brilliant manuscript

Scholars and teachers of Chekhov's technique have hailed On the Technique of Acting as the clearest, most accurate presentation of the principles he taught Yul Brynner, Gregory Peck, Marilyn Monroe, Anthony Quinn, Beatrice Straight, and Mala Powers, among others

This new, definitive edition of Chekhov's masterful work clarifies the principles outlined in To the Actor concerning the pivotal role of the imagination in actors' understanding of themselves and the roles they play. On the Technique of Acting also expands on Chekhov's previously published work with many unique features, including:

* A chapter devoted to screen acting

* More thorough explanations of the Psychological Gesture, inner tempo vs. outer tempo, and other key concepts of Chekhov's approach

For actors, directors, and anyone interested in the theater, On The Technique of Acting is an essential handbook