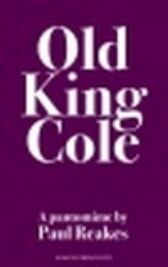 Large Mixed Cast
King Cole may be old, but he's not too old to fall in love!

The women of the town and royal cook Dotty Dumplin are queueing up to audition for the role of Queen, but King Cole already has his heart set on Debbie Dumplin - Dotty's daughter

Unfortunately Debbie has fallen in love with Florian, who also happens to be the King's aide

Meanwhile, King Cole's evil brother Peski and his wife Pariah are conspiring to unseat him from the throne - with a little help from a magic pool that reverses the ageing process, turning Old King Cole into Young King Cole!

Outrageous characters, flamboyant costumes, jokes, songs and an exploding birthday cake all feature in this highly entertaining re-telling of the well-known nursery rhyme

Chorus of - Courtiers, Pages, Townsfolk, Tradespeople and Creatures of the Forbidden Forest