Of Grapes and Nuts 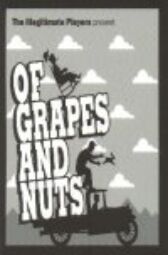 "'It ain't the heat, it's the humility.' That opening line strangely summarizes the heartbreak of GRAPES OF WRATH and sets the tone for this clever show. Irreverent on its surface, hilariously accurate in its mimicry, OF GRAPES AND NUTS is a tribute par excellence to Steinbeck...." Susan Pellowe, Plays International

"The Players have scaled comic heights before. Their GLASS MENDACITY was the most devastating send-up of Tennessee Williams since his last four plays, and ALL MY SPITE reduced Arthur Miller to an hour-long gut buster. But with OF GRAPES AND NUTS, a surefire satire on Steinbeck, they've struck the mother lode of comedy." Lawrence Bommer, Reader 4m, 2w (double cast)