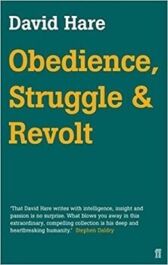 Published by Faber and Faber

What is a political playwright?

Does theatre have any direct effect on society?

Why choose to work in a medium which speaks to so few?

Is theatre itself facing oblivion?

All frequent questions addressed to David Hare over the last thirty-five years, as his work has taken him from the travelling fringe to the National Theatre, from seasons on Broadway to performances in prisons, church halls and on bare floors

Since 1978, Hare has sought uniquely to address these and other questions in occasional lectures given both in Britain and abroad

Now, for the first time, these lectures are collected together with some of his more recent prose pieces about God, Iraq, Israel/Palestine and the privatisation of the railways

Bringing to the lectern the same wit, insight and gift for the essential for which his plays are known, Hare presents the distilled result of a lifetime's sustained thinking about art and politics.