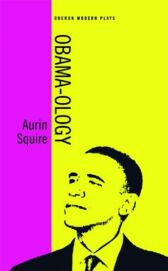 This invisible underclass despondent after a lifetime of presidential campaigns with only the educated, white candidate to represent them have the flame of hope reignited by a passionate young man canvassing for Obama ...

Warren's fired up and ready to go

Until he lands in the troubled streets of East Cleveland

Somewhere between knocking on doors, fending off cops, and questioning his own racial and sexual identity, he learns that changing society isn't as easy as he imagined

"See this play. This production. Both are miraculous" ~ Timothy Ramsden, ReviewsGate

"A fine play about politicking US style written by an African-American whose work has not previously been seen in Europe" ~ Philip Fisher, British Theatre Guide

"Both political and intensely human ... The whole piece, so vividly played, might hopefully retain the American Dream. But it does so with a wide-awake sense of reality" ~ Reviews Gate

"A highly topical piece of theatre. As protest continues in Ferguson after the shooting of Michael Brown by a white police officer, it is ever more important that we push stark examinations of police relations with black communities into the popular sphere" ~ Hannah Blyth, Everything Theatre